Ride for a Cause - Durian (King of Fruit) 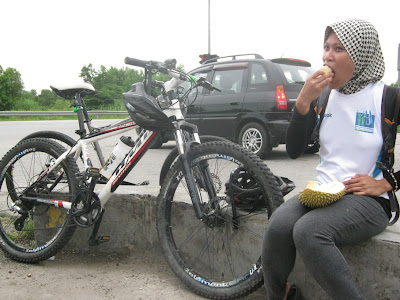 Ride for a Cause - Durian
Durian:
The durian (pronounced /ˈdjʊriən/) is the fruit of several tree species belonging to the genus Durio and the Malvaceae family (although some taxonomists place Durio in a distinct family, Durionaceae). Widely known and revered in southeast Asia as the "king of fruits", the durian is distinctive for its large size, unique odour, and formidable thorn-covered husk. The fruit can grow as large as 30 centimetres (12 in) long and 15 centimetres (6 in) in diameter, and it typically weighs one to three kilograms (2 to 7 lb). Its shape ranges from oblong to round, the colour of its husk green to brown, and its flesh pale yellow to red, depending on the species.
Further reading at http://en.wikipedia.org/wiki/Durian
Picture info:
On the way back from Paya Indah Wetlands to Putrajaya Challenge Park. Stopped somewhere in Dengkil to taste the durian, dated 04.07.2010
Posted by Azizan Zolkipli at Monday, July 04, 2011