Ride for a Cause: Hari Raya & National Day 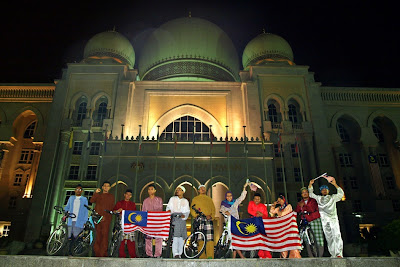 Ride for a Cause: Hari Raya & National Day
Hari Raya (in Malay language), also called Eid ul-Fitr, Eid al-Fitr, Id-ul-Fitr, or Id al-Fitr (Arabic: ‎عيد الفطر ‘Īdu l-Fiṭr), often abbreviated to Eid, is a Muslim holiday that marks the end of Ramadan, the Islamic holy month of fasting (sawm). Eid is an Arabic word meaning "festivity," while Fiṭr means "breaking the fast". The holiday celebrates the conclusion of the 29 or 30 days of dawn-to-sunset fasting during the entire month of Ramadan. The first day of Eid, therefore, falls on the first day of the month Shawwal.
Muslims are commanded by God in the Qur'an to complete their fast until the last day of Ramadan and pay the Zakat al-fitr before doing the Eid prayer.
Source: http://en.wikipedia.org/wiki/Hari_Raya

National Day is a designated date on which celebrations mark the nationhood of a nation or non-sovereign country. This nationhood can be symbolized by the date of independence, of becoming republic or a significant date for a patron saint or a ruler (birthday, accession, removal, etc.). Often the day is not called "National Day" but serves and can be considered as one. The National Day will often be a national holiday.
Some countries have more than one National Day. This signals the use of a ”class” of National Days, that are equally important in the foundation of the nation, and a ”class” of less important official public holidays. Importance attached to the National Day as well as the degree to which it is celebrated vary greatly from country to country.
Most countries have a fixed date National Day, but some have movable dates. National days can be categorized in two large blocks:
- Newer countries that celebrate their national day as the day of their independence.
- Older countries that use some other event of special significance as their national day.
Denmark and the UK are among the few countries which do not have designated national days.
Source: http://en.wikipedia.org/wiki/National_Day